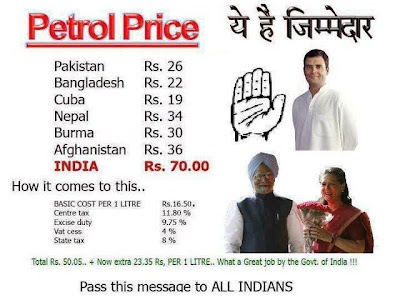 This picture is in circulation on facebook since months.
PETROL PRICES :
Pakistan Rs.26
Bangladesh Rs.22
Cuba Rs.19
Nepal Rs.34
Burma Rs.30
Afghanistan Rs.36
INDIA Rs. 70.00.
How it comes to this... :-
Basic cost per 1 litre - 16.50 + Centre tax - 11.80% + Excise duty -9.75% + Vat Cess- 4% + State tax -8% = Total Rs 50.05 .
+ Now extra 23.35 Rs..per litre...
What a Great job by the Govt. of India !!!
The figures were attributed to World Bank.
Like a typical salaried-class Indian, I had tanked up last evening, much before the midnight clock would strike. It was not the Rs 3.14 price rise that made me do it. Every time I come back to my Noida residence from New Delhi, I simply tank up. You might even say that I am a bit paranoid about running out of fuel.
It's not that these hikes do not affect me. For someone who gets one hike a year, it hurts for sure. It's just that over the last two to three years, I, like so many others, have got used to the vagaries of international economic system. Words like price rise, meltdown, lay offs are no more terrifying today. They are a part of life.
But reading this post made me feel real bad. I was hurt. I was aghast. I felt cheated. I felt unlucky to have been born in India. I wanted to be in Cuba. Suddenly the prospect of eating up the beachfront tarmac in Havana on a 1950s' Buick while puffing on a Number 4 cigar seemed so much more enticing.
But then, like a sceptic, I decided to check for myself. And I found out that even after direct conversion (which anyways is not the wisest thing to do), after April 11, 2011, petrol sold at Rs 45.16 per litre in Pakistan. It sold for Rs 48 in Dhaka post-May 2011. Both these countries receive preferential treatment from the oil-producing West Asian countries. In Nepal, people had to pay Rs 60 for a litre of petrol from March, 2011.
And my Havana dreams were miserably shattered when I found out that even there, in spite of the existence of a barter deal between Chavez's Venezuela and Castro's Cuba, people had to shell out Rs 57 for a litre of petrol from March 1, 2011.
The World Wide Web has no doubt taken the concept of free flow of information to an altogether different level. And at the same time, it has blurred the lines between reality and propaganda. But the medium cannot be faulted. It is the users' responsibility to verify the authenticity of any information circulated through Facebook posts or Wikipedia articles. Otherwise, fiction will continue to pass off as fact and emotions will continue to be stirred for wrong reasons.
Original Post:
http://ibnlive.in.com/blogs/tathagatabhattacharya/2947/62714/facebook-petrol-price-hoax-think-before-you-like.html
Posted by ओंकार दाभाडकर

Email ThisBlogThis!Share to TwitterShare to FacebookShare to Pinterest
Labels: Outsourced