The Salman verdict, "being human" of our judiciary and Yudhishthir's just verdict

The Salman Khan trial had created ruckus on social media. People, obviously, forgot about it quite quickly and are posting updates on fb about "watching Bajarangi Bhaijan". In my opinion, People should NOT watch the movie - any movie of this "bhai". And of Sanjay Dutt, for that matter. I have logical reasons for the same. Had posted a detailed post regarding Salman verdict in Marathi. This is it's translation (modified version). I think it's needed that this gets discussed, shared again.
---

It is natural for common man to feel surprised and dejected by the whole Salman case. A hit and run case, being dragged for years, the accused carrying on his business meanwhile, influencing the case in various ways, getting punishment verdict (after YEARS of trial) and getting bail (within MINUTES) - is a reason to make us feel frustrated. However, we should use this opportunity to understand the glitches in the system, think of ways to fix the glitches - understand judiciary in other nations, see how they have sorted their justice system and try to implement similar solutions here.

However, many pro-Salman people across all eco-social level are asking three Qs regarding Salman case.

1) Salman can really be innocent. Is it okay to trust one police witness?
2) Shall we ignore his social work? He's a good man!
3) There are many such cases happening daily in India but we don't give a damn about them. Why so much fuss about Salman's case? Only because he is a celebrity? Isn't this wrong?

First - Salman IS NOT INNOCENT. Well, whether he was driving the vehicle or not isn't a primary matter at all. In the cases of "hit and run" - the "run" should be considered a much more serious offense than the "hit". Whether Salman was drunk or not, whether he was driving or someone else - these are not the matters of primary importance.

After the mishap happened - HE RAN AWAY. Not just from the spot but from HIS RESPONSIBILITY. Assuming he was scared, confused at the moment - he didn't come forward afterwards either. Further, deliberately delaying the verdict, the torture of the police-bodyguard, threatening a blogger...these all are evidences proving that Salman has failed in "being a human" on various fronts.

So - he IS A CRIMINAL. If not of a "hit" crime (even if we assume it was a genuine mistake, unfortunate accident), then certainly of a "run" and many other grave crimes.

This brings to point 2 - Salman, being a good human being.
ARE YOU KIDDING ME?

The things he has done - the Chinkara poaching case, the hit and run case and the subsequent crimes I have narrated above --- do this make for a good man? NO good man will run away from responsibility, torture a policeman, threaten media and suppress free voices. It is quite obvious - Salman did all the charity and goody-good stuff to create an image. All the charity he has done comes directly from his PR budget. To build goodwill and thus influence people's opinions and thus affect the judgement by adding an important point in his defense.

--- This is why I believe that we should refrain from watching his movies. We should't help him earn money (and fame) which he is aiming to use to defend his criminal acts.

Similarly, shouldn't the Judiciary look at these humanitarian aspects of Salman's misbehavior and expedite the process accordingly? If the lawyer-judge system ain't considering these aspects - it's US who should add the "being human" touch to our justice system.

A society becomes what its elite class becomes. We follow our heroes. If our heroes go criminal, and they go scot free - that sends a message to other criminal minds. That's how society shapes up. That's how social psyche works. And thus, more wealthy and socially influential you are - harsher should be the punishment for you. And - that's how our ancient justice system was. There's an example from Mahabharat.

A case is being discussed in Rajsabha. Four criminals, belonging to 4 varnas (Brahman, Kshatriya, Shudra and Vaishya) - it's proved that they are murderers. The punishment is to be decided now. The pradhan amatya, Vidur suggests that both the princes - Duryodhan and Yudhishthir - should be given an opportunity to opine about punishment. Let the rajsabha see if they are worthy of being rulers.

Duryodhan declares same punishment to all 4. Whereas, Dharmaraj Yudhishthir declares different punishments to all 4. Harshest of all - Death Penalty - to Brahman. He justifies his verdict by saying - Brahman is the most respected person in the society. His behavior is an example for all. He MUST BE an IDEAL person. If he commits such a crime, it sends a negative message to the society and hence - he deserves death penalty.

Doesn't that make sense? Of course, implementing Yudhishthir's logic isn't possible in today's complex social structure. But the direction, guiding principles should be on the same lines.

These days, the over emphasis on "equality" is getting us into a habit of ignoring many social-psychological principles. Which is leading to a disaster.

As I have said above - It's time we stop cribbing among ourselves and do something about it. If the system isn't taking the filth out - we have to.
Posted by ओंकार दाभाडकर No comments:

Whenever one starts a political discussion in India,
Posted by ओंकार दाभाडकर No comments: 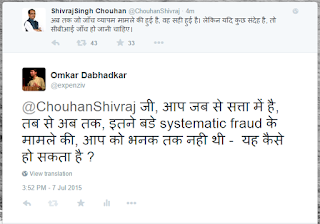 Give It Up campaign by Narendra Modi

Prime Minister Narendra Modi has asked Indians to give up LPG subsidies.
A good initiative, indeed. However, this
Posted by ओंकार दाभाडकर No comments: